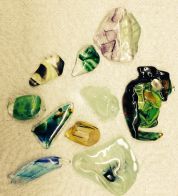 One of the most fascinating mysteries about creativity is problem finding. How do artists decide what to create, writers decide what to write, or scientists determine what to investigate? The finding of a creative task is the heart of the creative process. We know something about the kinds of behaviors that can lead to problem finding, but exactly how it happens remains a mystery.

For me, as I develop more creative projects of my own, the puzzle continues to grow—particularly in my continuing exploration of mosaics. I used to envision artists struggling to come up with an idea, and then figuring out how to bring that idea to life. But I find the reality much less straightforward. In my very-amateur reality, problem finding and problem solving seem to interact through much of the creative process. Let me tell you about my latest (slightly weird) project. 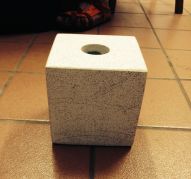 The roots of the project started a couple years ago when I found some rectangular outdoor oil lamps made of some kind of white cement-like material on the end-of-summer clearance table. Their plain white surfaces just cried out for mosaics. So I bought one tall and one short lamp, and put them in the basement for a time I wanted a project. At one level, I’d found a problem. I would mosaic two oil lamps. But that was all I knew.

Fast forward several years. I finished a long mosaic project and was ready for something different, so the long-stored oil lamps came to mind. But I had no idea what I wanted to do with them. I spent an evening exploring the treasures of the mosaic studio—tiles, beads, all manner of colored glass, and miscellaneous treasures gathered in my teacher’s decades as an artist. The only decision I made was that I wanted to use tiles rather than cut glass, simply to minimize sharp edges on an object likely to picked up regularly.

But to me, tiles are boring, if put in straight rows on a square object. So what to do? Somehow, during the following week, I thought about boring tiles and wondered what it would be like if the straight boring tiles cracked open and something popped out. (I told you this project was slightly strange.) The idea made me chuckle. What if I covered the lamps with the plainest possible tile and created a simulated crack. What might emerge? And have I found a problem?

Back to the studio. This time I searched the shelves in search of an idea of what might emerge from an imaginary crack. The beginnings of a solution came in a collection of fused glass pieces (above) that struck me as resembling alien flowers. That was it! I would use fused glass to create strange plants emerging from my very plain tiled lamp. 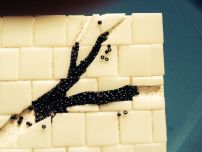 The project still is in progress. One lamp is tiled, and I’m experimenting with seed beads as “alien dirt.” I’m having lots of fun, though I still have no clue what will form the stems. I think, now, I’m working on solving a mosaic problem rather than finding one, but I could be wrong. Mosaic problems seem to grow and shift: Make a lamp. Make a lamp covered with tile. Make a tiled lamp with an imaginary crack. Make a tiled lamp with alien flowers emerging from an imaginary crack.

I don’t pretend to know the line where problem finding and problem solving divide—or if such a line exists. But I do know that in many creative projects, the problem can shift and grow.

It is interesting to think about when students have the chance to find a problem and allow it to grow. How many times—even in the arts–do we present students with pre-formed problems to be solved as directed, rather than allowing the problems to emerge? To do that, problems need to span time, and assignments need to be flexible enough to change shape. I need to think more about what that would look like.

But for now, I need to figure out what kinds of stems support alien flowers.