Years ago at one of our many used-bookstore-quests I bought a book called Daughters of America or Women of the Century by Phebe A. Hanaford. Published in 1882, it celebrates the accomplishments of women in the first century of the United States, from preachers to scientists, and everything in between. It saddens me how few of the names are even vaguely familiar.

The chapter on women inventors is short, and the author responds with outrage. The chapter begins, “The question is sneeringly asked sometimes, Can a woman invent? The great Centennial exposition answered the question satisfactorily; and those who saw and heard the dish-washer and other women who were displaying their own inventions there will not soon forget them.” Quoting Mrs. Matilda J. Gage of the Fayetteville Recorder, she goes on, “Let the Woman’s Pavilion gather all it can of woman’s work, it will still fall far short of an

accurate representation of woman’s industries and inventions because most of the large manufacturing establishments are owned by men…the work done by women in those establishments will be entered in men’s names” (pp. 621-22)

In fact, the Women’s Pavilion appears to have been a marvel, complete with a formally attired Emma Allison who tended a steam engine used to power several machines in the exhibit. Here’s how she was described in the Pacific Rural Press in 1876. 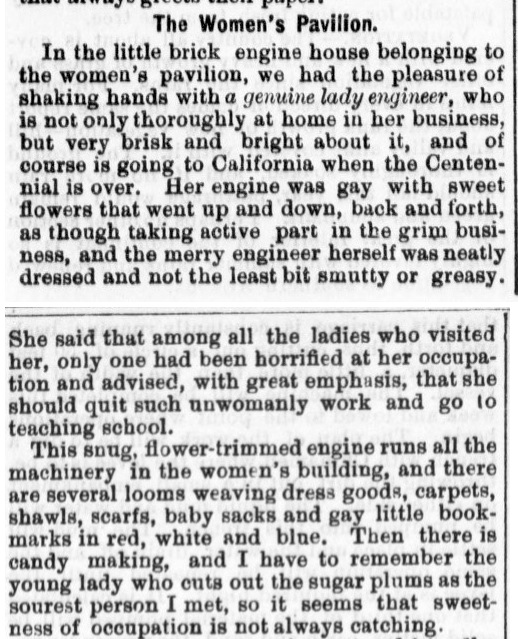 Very little information on Emma exists (see blog link above), so perhaps your students might joint the hunt. Aren’t you curious, too? And the truth is, those 19th century women were well justified in their outrage about the number of creative women whose accomplishments were credited to others. How many women inventors do you know? How many show up on your bulletin boards along with Thomas Edison and Alexander Graham Bell?

It is important that the creative girls in our midst understand women inventors have always been among us, regardless of whether they got credit for their efforts. When you study inventing and inventions, here are a few resources to get you started.

19 Things You Might Not Know Were Invented by Women

Why So Few Women Inventors (Phebe was right!)

If you find other resources to add to the list–or especially if you learn anything new about Emma–I’d love to hear about it.