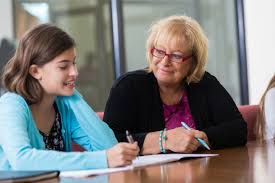 What could you do to make your students feel safer to be creative?

The question of how safe spaces become safe is one asked by an international team of researchers* who wanted to know how relationships in a work environment might influence employees’ creativity. If a supervisor listened carefully and respectfully to workers’ ideas, how might that impact their work? Would they be more creative? In this series of studies, the answer was yes.

Back in the 1950’s, Carl Rogers theorized that creativity is best nurtured in an atmosphere of psychological safety–a place people feel accepted and respected for who they are. Today, psychological safety is considered to be important for workplace teams—teams need to feel safe in order to work well together. This group of researchers combined these two ideas in a series of studies. They asked, “If supervisors listen, will workers feel safer? And if they feel safer, will they have more creative ideas?”

The conclusions were interesting, and reminded me of classroom dynamics. They found that when supervisors listened carefully to those they supervised, the group members were more likely to generate creative ideas. They suggested the workers might ask themselves, “If I propose this idea or say this out loud, will I be ridiculed, embarrassed, or criticized?” If the answer is yes, why would the worker take that risk? Chances are, they won’t.  And don’t those seem like questions any student might ask about sharing ideas in class? In a safe environment, the ideas could be shared.

The particularly interesting thing about these studies is they give us hints about one thing that makes a (psychologically) safe space feel safe—the person in charge listens with respect and interest. Of course we don’t (yet) have research extending this research into classrooms, but doesn’t it just make sense? If listening with care helps adults feel safe to share their ideas and try new things, isn’t it likely to be important for students as well? It sounds like an important thing to try and a simple way to support students’ creativity. It doesn’t cost a cent and doesn’t require special training, just a willingness to stop, focus, and attend. I think I’m going to work on that.