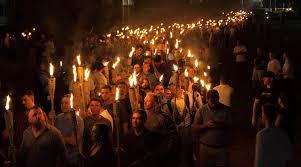 My husband has twice played Tevye, the lead role in Fiddler on the Roof. I love the character—his devotion to his family, his devotion to his faith, his flexibility and humor. Several times during the play his daughters bring him dilemmas regarding prospective son-in-laws and he reasons them out, seeking to understand both sides, generally in the form of one of his dialogues with God. The first two times he is able to come to see his daughters’ points of view and accedes to their wishes. The problem comes with the third daughter, who wants to marry outside their faith, to one of the soldiers occupying their village. Tevye starts his usual pattern, “On one hand. . . .” and lays out all the reasons she should not marry the soldier. Then, “On the other hand. . . .” And there Tevye stops. In one of the most heart-wrenching moments of the play, he agonizes, “There is no other hand. If I bend that far I will break.” That moment tears his family—and his heart—apart. But he could do nothing else without sacrificing all he believed was true.

I’ve thought of that line a lot this week. When we think of creative thinking, the first images that spring to mind are probably of playfully generating ideas, using metaphors, striving to think of the situation flexibly, looking at all possibilities. Those things are essential to the creative process. But they are only part of the picture. In creative thinking we generate many ideas in order to come up with good ideas. We look at many sides in order to make wise choices. But thinking flexibly does not mean all ideas have equal power or equal value. Evaluating our ideas and using criteria to judge them (as is part of the structure of Creative Problem Solving) is essential, too.

This week, as some voices have claimed “blame on both sides,” I’ve wanted to shout, “When it comes to white supremacy and Neo-Nazi rhetoric, there is no other hand.” Period. At least for me, if I try to bend that far, like Tevye, I will break. It is such a gift to live in a democracy that has tried, imperfectly, to create a place for diverse people to live and learn together. We must not let the notion of examining many sides—which is a good and important process—get mixed up with the idea that all sides are equally valid. Sometimes they aren’t, and young people need to think hard about how they make such judgments, and which principles serve as their ethical core. They will need help in learning both parts of the process.

It is a hard thing to balance in schools, I know. But if you want to try, here are a few resources to help you get started.

This is hard work, but important. Hate groups target young minds. We must prepare them to resist, be wise, and follow the values that are most important to them–even if, like Tevye, our hearts sometimes break.