Why, in the midst of end-of-term grading, holiday preparations, and even (I can’t believe it) preparing for new courses that start January 4, why take the time to write about creativity? And since your lives are probably just as crazy, why take time to read about it?

I thought about that today, as I dashed from task to task, and decided it is because creativity matters. It really does. And it makes our world better, in so many ways. So, for today, here are just a few of the ways creativity’s gifts have crossed my computer screen in the last few weeks—and, because here we’re all about teaching—some teaching suggestions, too.

Here’s wonderful story about an ancient material put to new uses. Arun Cherian had come from his native India to Purdue University to pursue his PhD in mechanical engineering, when he went home for a family wedding. While there he thought about the cane that was used to create strong lightweight furniture. He wondered what else might be made from such a material, and thought in a direction no one had thought before: inexpensive prosthetic legs.

Cherian’s work can be an inspiration to your students. Think about any material that is abundant in your part of the world. What are its characteristics? For what tasks or problems might such characteristics be needed? Could you brainstorm inventions that might take advantage of your local materials?

Creativity can make us smile.

It is December in Michigan, which means it is cold and the ground is covered with snow. I’ve posted before about how much I miss Calvin and Hobbs, particularly Calvin’s bizarre snow creations. Here’s a link to real-world snow originality that just makes me smile. There are others you can uncover with a quick search. It is almost enough to make me want to go outside and get building. Almost. But wouldn’t your students have fun designing original snow creations–even if they have to make them of sand or clay?

Or how about my smile for the day–ugly Christmas sweater cookies? Thanks to some young friends I had a creativity break–and a tasty one, at that. 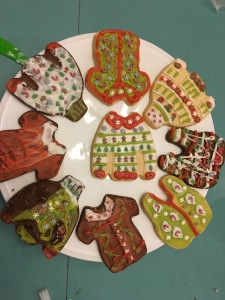 But aside from the silly frosting, this is a fine example of creative combinations–ugly Christmas sweaters and traditional Christmas cookies come together to make something new. Perhaps you might challenge students to combine two traditions from a holiday of their choice to create a new tradition. Who knows what might emerge?

There were so many options here, it was hard to choose but I actually came back to some loveliness I’ve shared before–maybe because it is so wonderful to see green. But look again at what happens when someone looks at something growing and imagines what else might be there.

I’d love to see students work on these projects–maybe even using photos, if the outdoors is buried or otherwise inaccessible.

Creativity can help in hard times.

For many people in the United States, the last month has been hard. Since our elections, there has been a spike in hate crimes targeting a number of populations,. Perhaps even more concerning to me, we’ve seen a substantial increase in school incidents in which perceived minority or immigrant students have been targeted by other students. I know it has happened in this area. It makes me heartsick. Then I went to a concert featuring one of my favorite folk singers, Carrie Newcomer. She sang this.

This song makes the world beautiful, but it also part of a long folk tradition of responding to difficulties with songs—sometimes of protest, sometimes of comfort. You can teach students about the role of music in social change. We often teach about spirituals when teaching about 19th century American History, but what about the role of folk music in the Civil Rights movement? Viet Nam? Lyrical Legacy, from the Library of Congress, is a great resource, featuring songs and poetry from across American History. If you teach students how creative music can affect problems, perhaps you can challenge them to write a song, or at least song lyrics, about a problem they see—big or small. It could be a kindergarten song about picking up litter or a middle school song about bullying. Either way, students use their creativity to make a hard thing better. And isn’t that what it’s for?

PS If you enjoy the video above, search for Carrie Newcomer, “You Can Do This Hard Thing.” Good for many occasions, for sure.