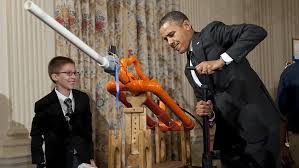 Ever since Joey Hudy fired his marshmallow cannon in the Whitehouse, there has been talk of a White House Maker Faire. Now,  the big day is almost here. The first ever White House Maker Faire will be held June 18, 2014. While, unlike most maker faires,  the event itself is not open to the public, June 18 also has been declared a nationwide “Day of Making.” Schools, companies, colleges, libraries, and museums are coming together to celebrate all things inventive.

The United States has always been a nation of tinkerers, inventors, and dreamers. This is a day to commemorate that heritage and look forward to inventions yet to come. Think about how you, your students, and your families can celebrate. Make something. Anything. Makers make robots, they knit sweaters, and they craft model rockets. Makers invent recipes, gutter-cleaners, page-turners, cardboard arcades and marshmallow cannons. Make something big or something small. It doesn’t matter.

Share your creation with others, and encourage the people around you to make something. Follow the action at the White House at www.whitehouse.gove/makerfaire or on Twitter at #NationofMakers. This is a day for fun, thoughtfulness, hope and creativity. Let’s celebrate!

P.S. Want to see the marshmallow cannon at work? Take a look.