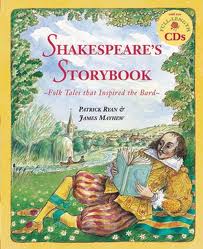 One of our regular holiday pastimes is exploring new bookstores, and this year was no exception. One of my favorite discoveries on a recent trip was Shakespeare’s Storybook, subtitled Folk Tales that Inspired the Bard. In it, storyteller Patrick Ryan explores the traditional tales that may have inspired some of Shakespeare’s most iconic stories. Imagine the children’s stories of Shakespeare’s childhood as fodder for his imagination. Who knew that Taming of the Shrew may have roots in a folk tale titled “The Devil’s Bet,” or that As You Like It may have resulted from a mash up of a 14th century poem that is similar to Robin Hood and an early version of Snow White?

Shakespeare’s Storybook is fascinating. It links tales across centuries in a kind of story genealogy that portrays Shakespeare, not as an isolated genius, but as one profoundly influenced by the culture around him. It also represents Shakespeare’s processes as problem finding of the highest order. For anyone teaching Shakespeare (especially to younger readers), this is a resource not to be missed, regardless of whether Ryan’s speculations about Shakespeare’s story-sources are accurate. (And, of course, we’ll never know.) You can begin by sharing the stories, but Shakespeare’s Storybook also offers opportunities for creative challenges.

If your students come up with new options for story/dramas, I’d love to hear about them.