It is a classic line: If the teacher is bored, we have a problem! In this guest post, Melanie Carbine describes a math lesson that is an example of both creative teaching, and teaching for creativity. Like many creative activities, it emerged from a moment of need. Here’s Melanie.

I had a month substituting for what I thought was my ideal teaching position: 8th grade pre-algebra and Algebra 1.  Coming into 8th grade after spring break would have taxed my planning abilities even if I hadn’t been the substitute.  The teacher had left plenty of basic lesson plans that I could use, and it sounded as if they had gone over geometric constructions before.  So, I let them have at it… epically overestimating their abilities (to self-manage)–especially with pointed implements in hand.  Then I sat down and started over.

From the start when I was looking at the week’s flipcharts and worksheets and quz, I just sighed: BORING!  You know you have a problem, when the teacher’s bored.  When are these kids ever going to need to construct a square free hand??  Carpentry.  Ok.  Architecture.  That’s a cool profession.  Photography.  Yes.  And comic strips and graphic novels.  Jackpot!!  They’ll learn how to construct squares as the means to do something cool. And creative.

With that in mind, we started the week off constructing lines again.  We copied a line segment, bisected a line segment, copied an angle, bisected an angle.  I did the first example of each and then had a volunteer give it a try.  Then, there was some independent practice.  Next day: copying triangles.  And, more practice.  Then we hit squares.  I was using the teacher’s flipchart and thought we could certainly get half way through the process.  Ha!  There were so many circles I was getting lost!

I let the kids do some problem solving and they developed a strategy that built on the skills they had previously developed.  Using their strategy*, I set them on the task of creating either a four-panel comic strip or constructing a Mondrian square, modeled on the geometric art work of Piet Mondrian. This easily took two 40-minute class sessions, especially with coloring the final products and some students completing both options.  Considering my open-ended directions, I thought the students still did a very nice job.

*Student Strategy: Double a line segment.  Bisect that line to create a right angle.  Measure off an equal distance.  Work as if finding the angle bisector, and connect the four points to make a square instead of drawing the diagonal.

Afterward from Alane: I particularly like this lesson because students had a double opportunity for creativity, while also practicing required math activities. Designing the Mondrian squares allowed for artistic creativity, and designing their own strategy for constructing squares provided a chance for flexible thinking in math. And as an added bonus, required math had a clear real-world purpose. Such a deal!

Think about a time you’ve incorporated creativity in one of your lessons–perhaps because even you were bored. I’d love to hear from more guest bloggers. Just go to the “About Creativiteach” link at the top of the page and tell me about it. 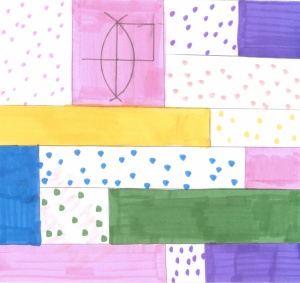 3 thoughts on “If the Teacher is Bored….”